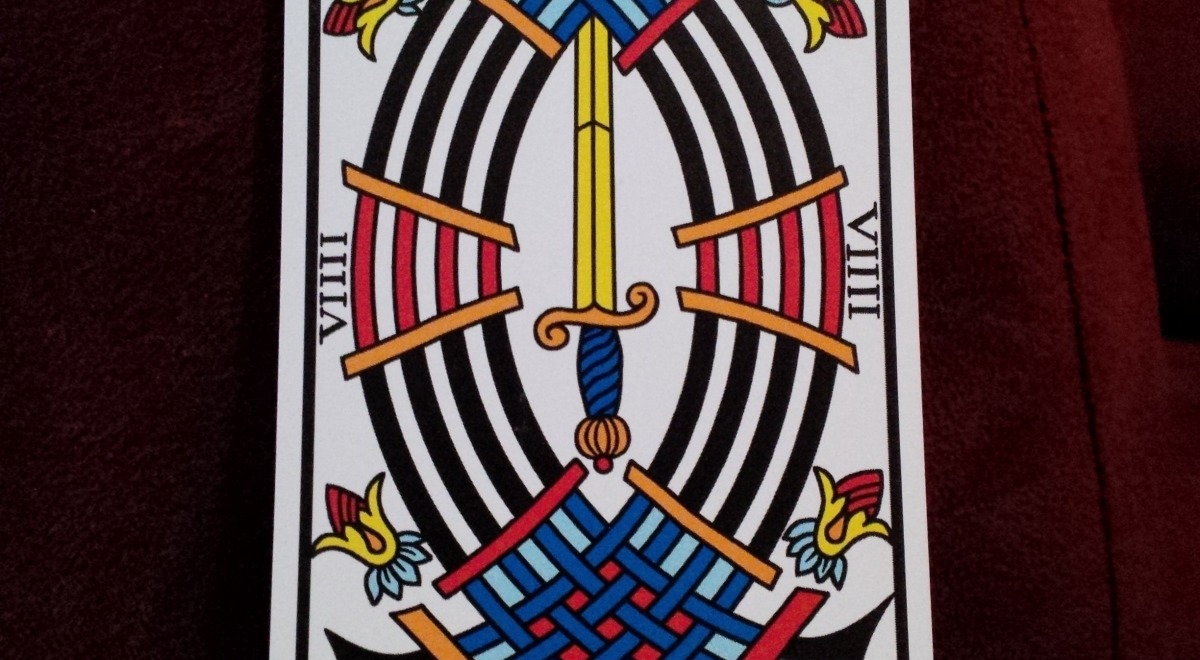 When I think about the number nine I inevitably and unavoidably think about the hermit, key 9 of the trumps. In this particular number 9, with an excessive amount of swords lying in opposition and the center sword piercing the hilts, I think about the negative aspects of the hermit. Alienation and mental vexation. This is an example of too much inward leading to overwhelming stress. The negativity of excessive mental exertion, lost in your own world and alienated, incomprehensible. Furthermore, the single sword striking upwards sports a crack on the blade, accuracy and reason is no longer possible with a damaged sword. One cannot fight with a broken sword, one will lose.

Paired with the Le Pendu and the striking symmetry of both cards is palpable. The pair of 4 swords lying in opposition become the two columns that hold the hanged man. The middle sword is the man himself, immobilized. The mesh of hilts with the single sword intermixed is the top branch from which the hanged man hangs. Le pendu visualy drives home the message the 9 of swords alludes two. This one cannot do anything, tied and alone. His pockets are empty, he has no more moves. Neither does he have power.

If I switch the cards around, I am lead to read this pairing as the consequences of the hanged man’s inertia and over thinking has lead to his impotence and inability to act. Instead of proactively doing, he wasted his time debating, doubting, thinking. This has led to the broken sword enmeshed in the hilts, unable to be put to action.

I have recently added two more decks to my collection. I’ll see about reviewing them at some point. One is Robert Place’s Alchemical Tarot renewed 4th edition, which I have wanted for some time. I really respect e work of Robert Place. The other is another heavy weight one, Dame Fortune’s Wheel by Paul Huson. Both are beauties and I definitely look forward to sharing them on here.